I've been think about the evolution in animation at Cartoon Network that led to the creation of The Venture Brothers, one of my favorite series. At times it seems like it's particularly aimed at a fan-collector-geek of my generation.
So, Cartoon Network announced way back in the 90s they were going to start creating "Adult oriented" animation for their late night block. I was skeptical at the time, but quickly came to love it.
Sealab 2021 begat Harvey Birdman Attorney at law, both of which were important steps in the de-sanctification of the networks animated archive, but also the rebirth of it as an age-appropriate appreciation of baby boomer and GenX Saturday Morning Nostalgia.
One small but crucial element was "The Night of the Living Doo," this spin on the classic Scooby Doo Movies, with celebrities David Cross, Gary Coleman, and Big Bad Voodoo Daddy. How 90's!
I originally caught this only by literally changing the channel to Adult Swim just as it was starting to air, and franticly hitting my Tivo record button. I have a homemade DVD of this somewhere that's quite clear, but for online, this fuzzy Youtube video will have to suffice for the moment. Enjoy!

The Curious Tale of Monkey Island

I was very sorry to hear "Dickie" Jones, best known as the voice of Pinocchio, passed away this week.  I really only ever met him once, but surprisingly, it had almost nothing to do with Disney.

A few years back when I was very into "Searching Ebay For Cool Old Stuff," I came across this matchbook cover for Monkey Island: 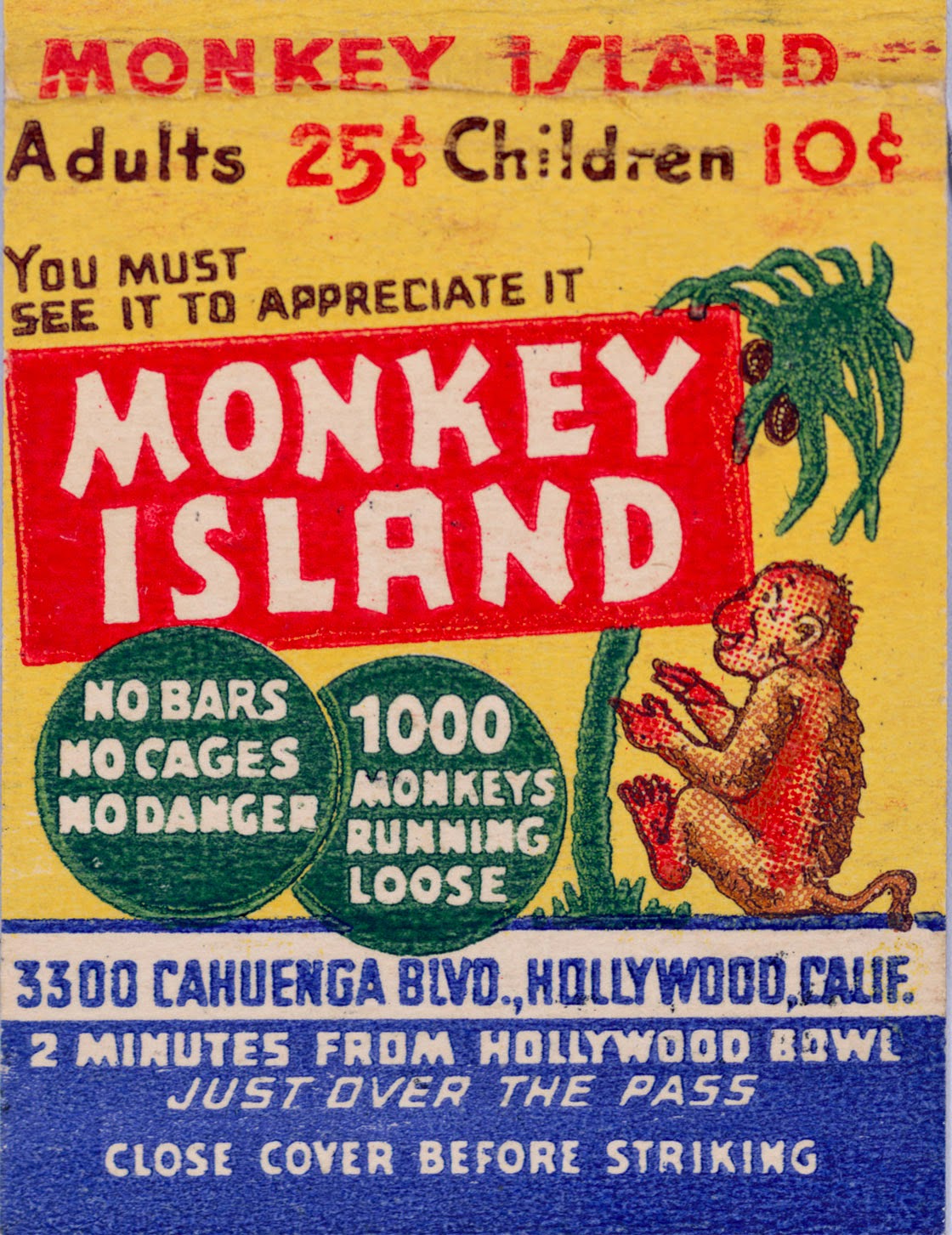 This looked fascinating to me.  "1000 Monkeys running loose!  No Bars - No Cages - No Danger."  Even better, the address put it pretty close to where I lived in Hollywood.  Cahuenga Boulevard now has the 101 freeway alongside it through "The Pass," and this address put the site of Monkey Island very close to my home, and right near what is now the Barham Blvd. exit from that freeway.

A little Googling led me to sites like this that gave the history of Monkey Island: basically, it was a concrete island surrounded by a concrete moat filled with water.  Here, as one account put it, "You paid a quarter to watch monkeys watch you watch them."  Apparently, it was also a popular place for divorced Hollywood dads to take their kids on weekends.   But most interesting to me it mentioned Dickie Jones as one of the celebrities who had visited. 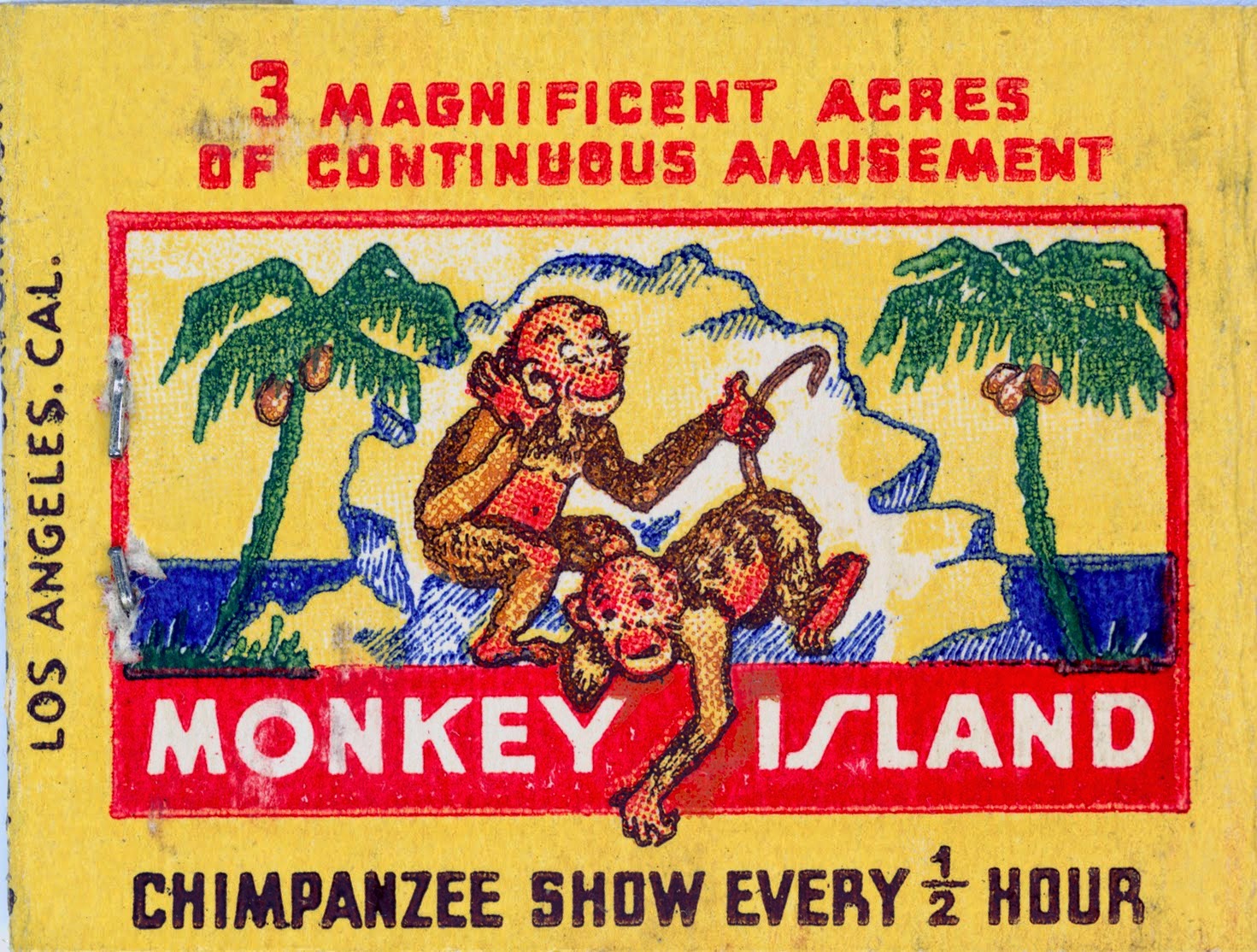 Now, I happened to be reading on this on the day after one of the Disney Legend Ceremonies, where I had seen Dickie on the Studio lot, attending as a previous recipient.  My curiosity to hear an eyewitness account of the place led me to track down his phone number, and I placed a call a few days later.  I admittedly felt a little silly, and perhaps a little presumptive and rude, to be calling a stranger about something so obscure, so long ago.

His answering machine picked up, and after his cheery, slightly familiar but much more mature voice greeting and the beep, I left my message:

"Hi Mr. Jones, I saw you at the Studio the other day, but I'm not calling about Pinocchio.  Uh, I saw an article that said you once visited 'Monkey Island' in Hollywood, and I was just wondering if you might remember anything about the place-"

I was cut off by a sudden clattering as if someone desperately grabbed for the phone.  Then, a gravelly voice, fraught with drama, grimly rasped five words I will never forget:

Dickie:  "They learned how to swim!"

Dickie:  "They learned how to swim!  There were monkeys all over Cahuenga Boulevard when you drove up there.  At night, they'd go back to the island to eat, but they were all over the place!"

A few months later he was at the Studio to record an interview, and I introduced myself as the guy who called.  "Monkey man!" he happily named me, and shook my hand enthusiastically.  He was very happy to receive printouts of the matchbook and other images I'd found of Monkey Island online.  I was most curious about his reaction to this one. Another copy of it (which I can't find now, sorry) had the original caption attached which positively confirmed this is Dickie, "enjoying" an experience most visitors never had, of being on the island itself literally up to his knees in hungry monkeys: 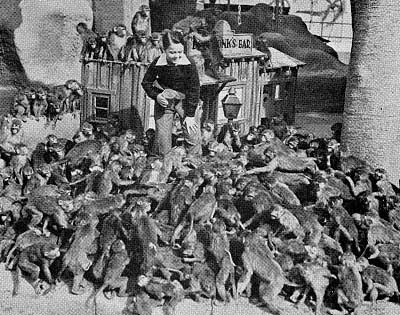 This looks like a terrifying experience to me.  Perhaps it was, worthy of repressing, because to my surprise Dickie looked at this photo and said with a deadpan face:

"I have no recollection of this at all!"

Postscript:  Awhile after that, my friend Dave Kooi and I visited the site of Monkey Island today, following vintage and current aerial photos to find the exact spot.  It is now the El Paseo De Cahuenga Park, a tiny little square of green almost exactly the size of the original Island location.  There's one tree in between the park and the freeway that's old enough to have shaded some monkeys. 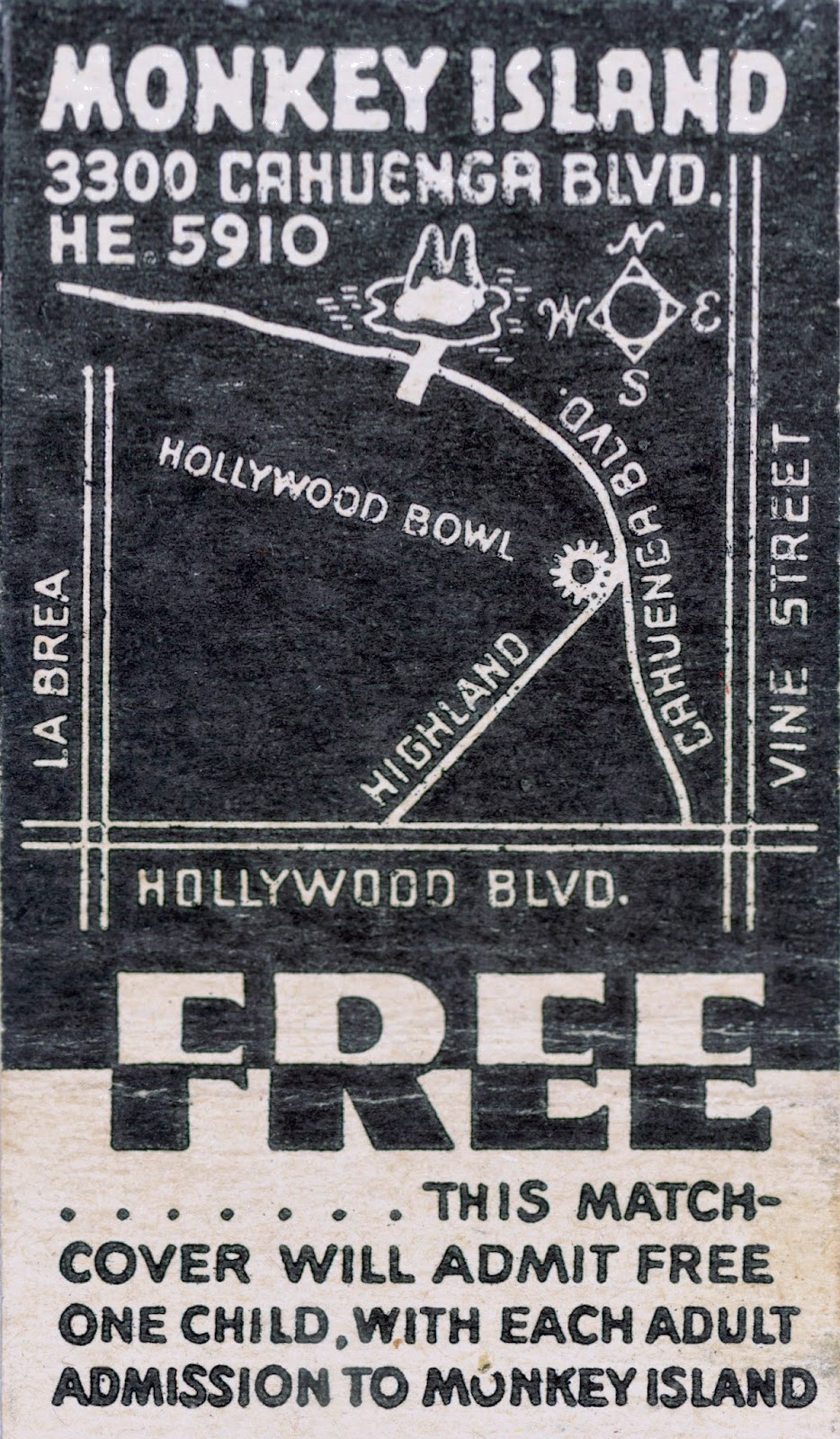 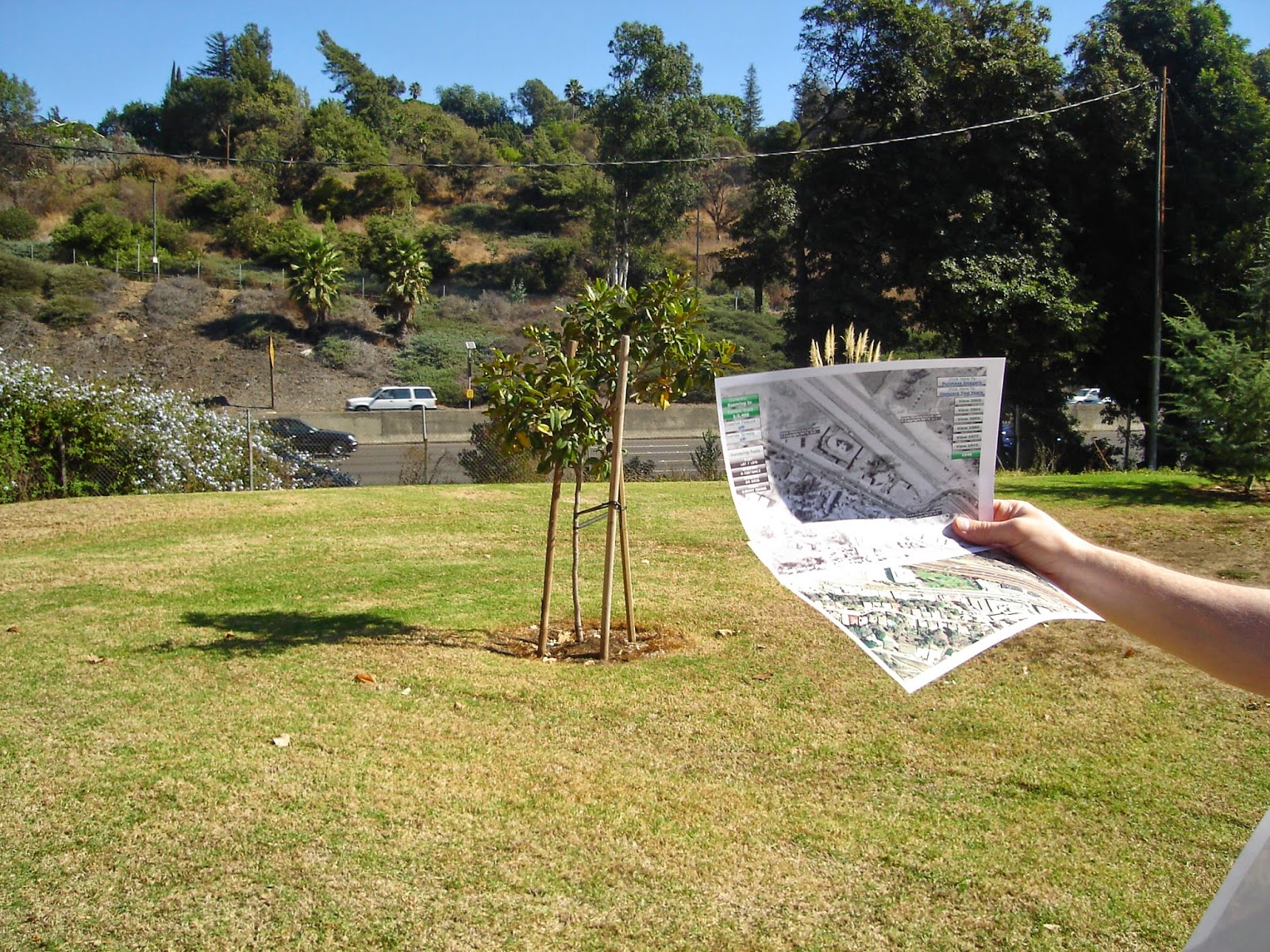 I like both George Takei and Penn Jillette very much, so I was quite glad to see Takei comment on meeting Penn on "The Celebrity Apprentice":
He especially enjoyed working with Penn Jillette, whom he found to be "an extremely well-read person, a walking encyclopedia. Where most of us forget or bury details in the back of our minds, he has the ability to recall dates and places and historic elements in conversation. When he's interested in something, he really digs in and explores it, and when he talks about a subject like that, you feel like you're getting a college lecture." Takei expects to catch a Penn & Teller show "the next time I'm in Vegas." 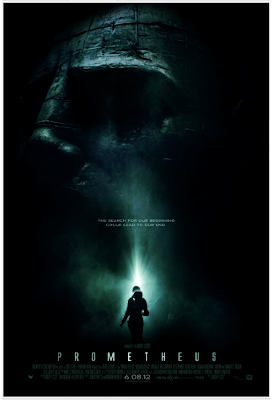 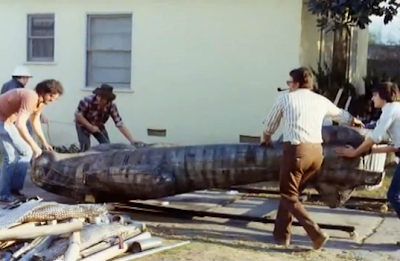 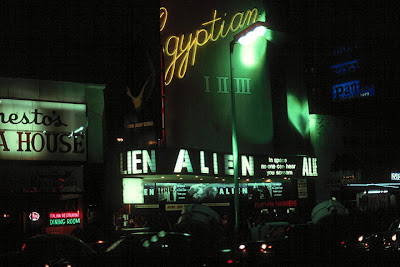 Apparently, we have a new theme. 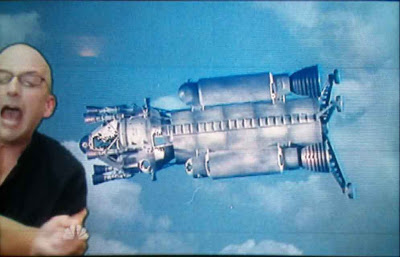 It's "footage of 1970's TV spaceships that ends up in karaoke videos on new programs." Last week's episode of Community featured scenes of Joel McHale as Jeff Winger and Jim Rash as Dean Pelton (that's him on the left screaming) making karaoke videos in the mall. They break into a fight as another video starts rolling behind them, and there once again appears the Salvage 1 spaceship on network screens for the second time in thirty years. (See the last entry if you're confused at this point).
Is this a new trend in television? Or the last time it'll ever happen? How odd.
Posted by FCG at 9:14 PM 1 comment: