And Now For Something Slightly Different 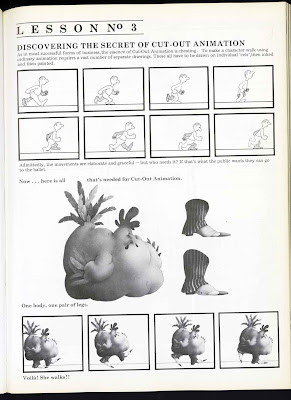 I grew up watching Monty Python in the 1970's, during it's initial run in the US on PBS stations.  I liked the show even when I didn't exactly understand the jokes.
I distinctly remember seeing the preview for Monty Python and the Holy Grail at some movie I went to with my grandfather, and him laughing at one of Terry Gilliam's animated bits.  (They probably shouldn't have been showing the trailer at a movie a nine year old kid would've been at, but oh well.  I thought it was funny too). 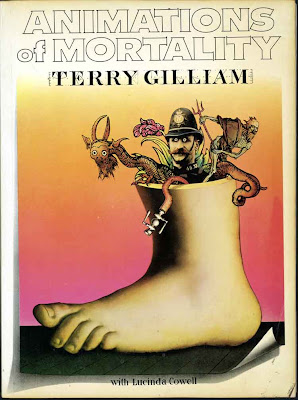 Several books have been released both by and about the Monty Python crew over the years, the most interesting ones to me being the early ones by them.  In that category falls Animations of Mortality by Terry Gilliam, released in 1978.  I distinctly remember seeing this when it was released in the Economy Book Store in downtown Syracuse NY, flipping through the pages looking at the familiar animation figures he had created mostly from cutouts for the show.  I never saw another copy again until I tripped across it on Ebay and snapped it up for less about cover price - a great deal since Amazon sellers now sell it for 80 dollars and up.
Inside much of the book described the process of making animated films - mostly with tongue planted firmly in cheek, to say the least.  In "Animation Lesson 3" up top, Gilliam outlines the method behind the clip and assemble animation that he, well, didn't pioneer, but certainly brought to a new level of legitimacy on Monty Python.  Enjoy.
Posted by FCG at 10:58 PM No comments:

Back when Crunchberries would've been Magenta #F653A6 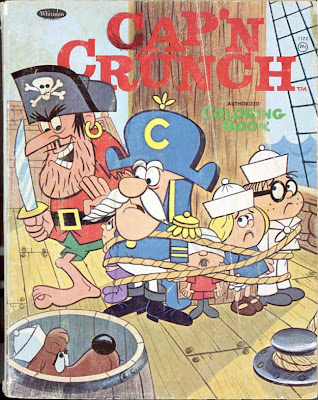 The Rose Bowl Flea Market is world famous as one of the largest places to buy used stuff.  It's also only about 20 minutes from my home.  As a collector, it's been tempting to go a few times.  On my first visit, I was in the middle of my cereal fixation, and I found this nifty coloring book from 1968. 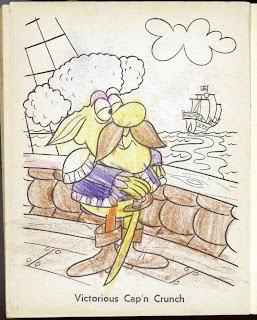 Once again the internet has made a cool connection by showing me a fellow blogger has the original art for this cover on his site here.  Very nice!  Well, while mine may be a run of the mill ordinary coloring book, I will point out the interior features one of a kind originals by an unknown artist, and it is Not For Sale.
Cap'n Crunch was always a favorite because, well, probably because it was very sweet, and because the commecrcials were essentially cartoons.  It's also the only cereal  I can think of that makes the roof of my mouth bleed if you have it too many days in a row.  I actually always liked waiting until it was on the verge of being soggy (I know, this is blasphemy, and I think the cereal company would have denied it was even possible).
My favorite Cap'n Crunch item is this cel, below, which if I remember correctly was the second cel I ever bought.  It was in a small animation art gallery on the 3rd Street Promenade in Santa Monica, and it's one of the few I paid real money for.  I seem to recall I bought it to celebrate when I either got paid for a big writing job, or got a tax refund check.   It hangs on the wall to the right of the Rocketeer poster, over my computer. 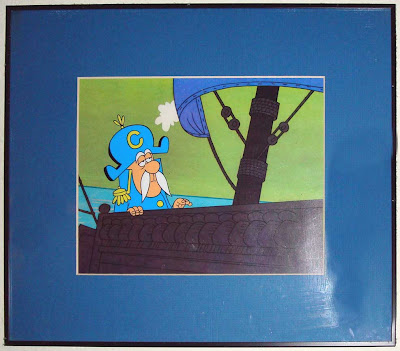 I liked it because I thought the Cap'n looked like he was nostalgically remembering his younger days at sea.  A friend suggested he's waiting on the set in between takes while shooting a commercial.
Posted by FCG at 8:56 PM No comments:

When the Collecting Stops 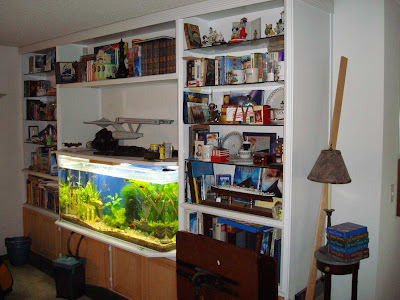 One year ago, one of my best friends passed away suddenly.
Bruce was a lifelong collector. If he knew about something he'd like, he had to have it. And his interests were varied. As a kid, he collected movie posters. Teenager, Beatles. He became fascinated with the JFK assassination, and had probably every book published on it, including one of his own, and a complete original bound set of the Warren Commission Report.
His house (above) was like a museum.  He collected Disney, Monty Python, Mystery Science 3000, Titanic (The real ship and the movie), Star Trek, Marx Brothers, WC Fields, Coca Cola, McDonalds, Apple Computers, and more things than I can think of to list here. 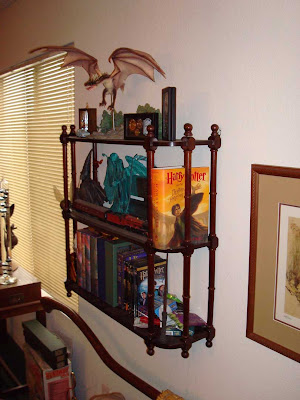 I got to know him in the last ten years or so, so I saw his interest in Harry Potter burgeon into full-blown collecting. All the books, the books on CD, the prop replicas, model trains (he collected trains too).  He set up a really great little display of his Potter stuff, with a full-sized broom hung by fish line underneath to look as if it was flying.
He had a complete collection of Mad magazine, or so he thought. When I asked about it once, he opened the first binder and showed me issue 1, issue 2, and... an empty sleeve for issue 3. "Oh yeah, I never got 3. I forgot about that." He looked at me. "Gee, thanks. I was perfectly happy thinking I had them all, now I have to find issue 3." Within a month or so, he had it off of Ebay.

After Bruce passed away, it fell upon me and others to help his family deal with all of his possessions. It was very sad to see many things that were so prized by him - as all a collectors collections are prized - now became so much less. A burden on his family, fodder for garage sales and Ebay, with, of course, treasured keepsakes scattered throughout. 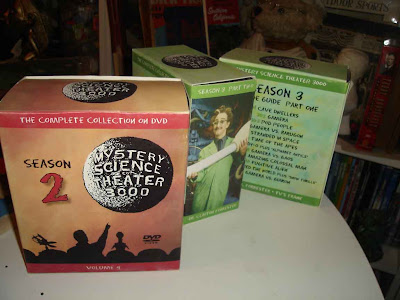 I asked for and was graciously given his Mystery Science Theater collection, because I had great memories of watching the show in his (self designed and built)  home theater and howling with laughter.  (if you ever get to see MST3K on a big screen, do it.  The illusion that Joel or Mike and the robots are sitting in a theater with you adds to the fun).  Bruce had every episode from Season Two up on tape, and was in the process of making his own box sets on DVD.  I got his one of a kind sets for seasons 2 & 3 too, they will always be treasured.  (The "real" Season One was only shown on local cable in the midwest; clips of it can be seen on Youtube).  Crow and Tom Servo now sit in my living room, near my own big screen. 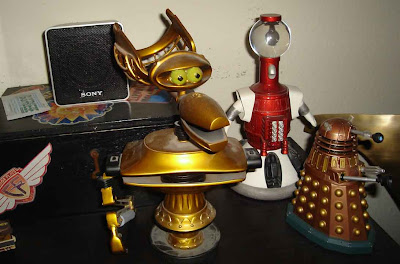 This all got me thinking, though, about how little collectors often are prepared for the handling of their prized possessions after they pass away.  If the family doesn't share the passion, they run the risk of throwing away valuable items unintentionally, or being ripped off by unscrupulous collectors.  I've heard tale of a well-known collector of 20,000 Leagues Under the Sea memorabilia who, on passing away, had his collection pillaged by his most hated rivals before, as they say, the body was even cold.  Even if the family is aware of the value of a collection, it creates extra distress - at a time when there's already plenty of distress - to try to deal with a collection in the way their loved one would have wanted, or in a way that at least gets them the fair value and moves the items on to someone else who will appreciate them.
Out of this experience,  I've developed a short list of things that every collector should do to protect both their collections and their family when they pass away:
1) Write a Will.  I know this seems obvious, and may feel a little creepy, but it makes things a lot easier on your family.  If you want something to go to a friend who'll appreciate it, they know.  If something is so rare it should be sold at auction, they know.  If you want your collection donated to an (appropriate) museum or library, they know.  It can be as simple as writing it out on a sheet of paper and throwing it in your desk.

2) Label items.  My Dad puts an index card in the front of his books, and with other collectibles, that tells when and how he got it, what it is, and why it's an important part of the collection.  Nobody else in the world has his knowledge of Theodore Roosevelt or more so his collection, so this information is invaluable.  The metal post shown here would likely have been tossed away, mistaken for an odd lighting fixture, if Bruce hadn't once just remarked to me that that pipe over in the corner of his garage was one of the original security fence posts from Forbidden Planet, set up to protect the ship from the invisible Id beast.  Without that knowledge, it was trash.  With it, it may fetch a couple thousand dollars at auction, restored.
3)Get rid of clutter.  This one seems less obvious, but it's always good if you can take stock of what you're saving, and just get rid of stuff you really have no use for anymore.  I become acutely aware of this only when taking a box to storage.  Heading into the unit, it may occur to me I'm never going to come out here and dig out, say, one of these old VHS tapes to watch - so why pay to store it forever, and leave for someone I care about to throw out after I'm gone?  I like to donate such stuff to Veterans or other charities, or give them to any friend I know who'll appreciate it.
Well, this was a long one, but I've been wanting to put it up for awhile, and now's the time.  Bruce's dying, and helping with his collections, profoundly affected how I feel about amassing materials myself.  I'll have several more stories to tell relating to these experiences from now on, and more, as always.
Oh, and by the way - I purchased Bruce's Harry Potter collection for a fair price.  Not that I had previously wanted it before, but I didn't quite want to see it go.  Now much of it is displayed on a shelf in my dining room area. 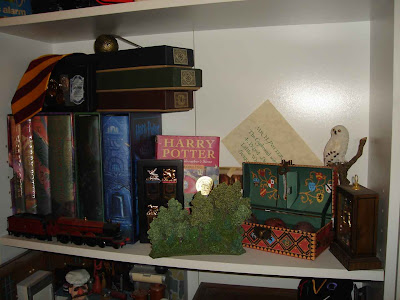