From the Desk of Doctor Sheldon Cooper: Literally

Some departments at Warner Brothers this year had the unique pleasure of holding their holiday parties on Stage 25, home of The Big Bang Theory set! I was not able to attend - employees only for these functions, which is fair - but someone very special to me went, and was able to share some terrific photography with me. These are just a couple of choice photos, I have plenty more to share later. 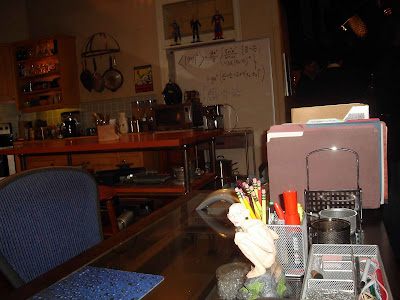 From up closer than we ever get to see Sheldon's desk, a view of superhero figures high in the kitchen that I'd never seen before - Batgirl, Superman, and possibly Black Canary look on frpom above the cookie jar made famous in "The Bat Jar Conjecture" - one of the episodes I got to see live. The folder - usually visible on Sheldon's desk right where it is here, is labelled "Hemoglobin test results." If I didn't know about the random nature of such set dressing, I'd be wondering what our favorite physicist is doing mucking around in the life sciences? 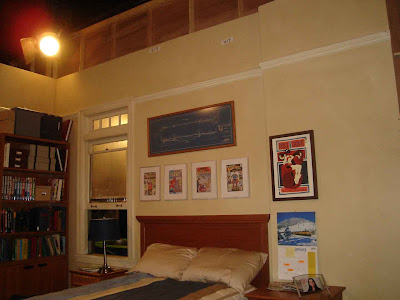 In this wide study of Sheldon's room, I'm glad to see one of the "House of Secrets" posters that used to be visible in the back has moved to a spot on his bedside not generally seen on the show. I believe these are called "fly"walls - if I remember correctly - extensions of the set often containing details never seen on screen. Don't worry about the photo on Sheldon's bedside, by the way - it's not a prop from the show, but was placed there as a gag by one of the gals taking pictures at the party. 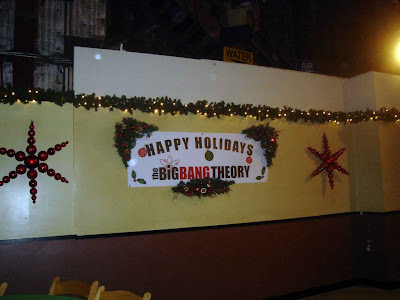 Happy Holidays to all who find their way here - Big Bang fans and Michael Jackson researchers from all over the world alike. And also, happy holidays to my family and friends who make it here, and those of you afflicted with that interest called "collecting" that enjoy hearing about my struggles with the accumulative urge.
Happy holidays!!
Posted by FCG at 11:06 PM 5 comments:

The Persistence of Vision Principle

I've said before that I watch pretty much anything that's animated. While that's not entirely true, more discerning viewers than I might have missed a surprise appearance by Sheldon, Leonard, and Penny from The Big Bang Theory on tonight's episode of Family Guy, "Business Guy." To summarize: 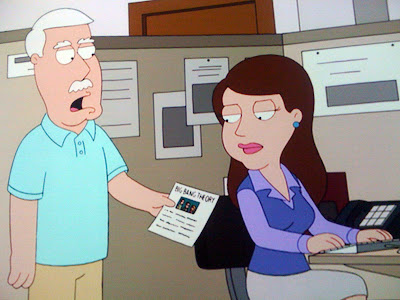 When Peter's father-in-law Carter Pewterschmidt is in a coma, Peter ends up in charge of his company, Pewterschmidt Industries. When Carter recovers, Peter stays in control of the company and as Carter's boss, forces him to do embarrassing things, like go cubicle to cubicle inviting coworkers to come over for a Big Bang Theory viewing party. 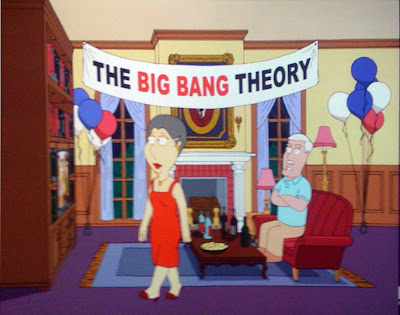 When no one wants to come over, Peter still makes him throw the party. Even his wife won't watch with Carter, but we get to see a clip of the show: 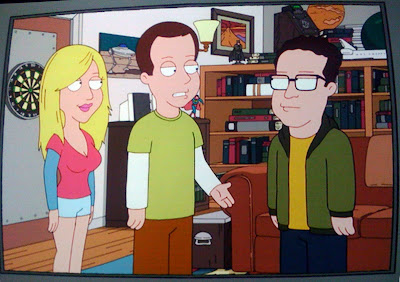 Sheldon: I'll have you know that I can bench press over 630 nanograms.
Leonard: Sheldon, that's less than two pounds.
Sheldon: Sounded better the way I said it.
Carter (watching): HA ha ha ha! Ohh, when I tell that joke at work tomorrow, people are going to be sorry they didn't come. This, this was a good night.
Johnny Galecki and Jim Parsons recorded their characters voices! I think they did a pretty good job of animating the look of the living room set, too. But is this show taking a cheap shot at BBT? No, for Family Guy, this is a virtual love letter. And besides, at the end of the episode: 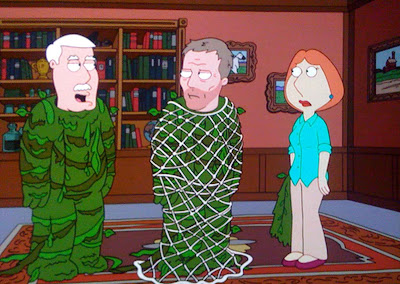 Carter invites Dr. House (actually voiced by Hugh Laurie) who he and Lois caught posing as a swamp monster, over to his house next week for a viewing of The Big Bang Theory.
Lois: Daddy, you don't have to do that any more.
Carter: I know, I know. I like it now.
You see, they were posing as swamp monsters to trick Peter into giving back control of the company. If you watch Family Guy, you understand. If you don't, but you want to see the BBT guys animated, you should be able to catch it soon on Adult Swim or Hulu.
Posted by FCG at 10:04 PM No comments: 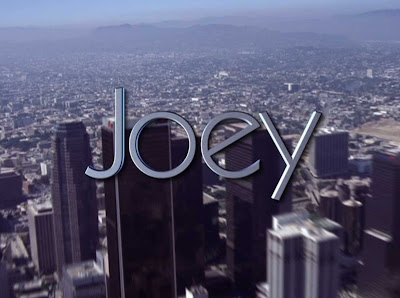 I've always been a fan of obscure television. It's like, the harder a show is to see, the more interested I am in it. The less people have heard about it, the more I want to know about it. (Remember Struck By Lightning? The sitcom starring Jack Elam as the Frankenstein monster? No?). Whe I was a kid, with my first Beta VCR, the Syracuse papers used to always say on the tv page when a show was airing for the last time - and I would always tape it. That's why I have a Beta tape somewhere with the last episode of AfterMASH on it, and one episode of Dreams, the 80's trippy music video inspired dramedy starring John Stamos and Jami Gertz as members of a struggling rock & roll band. That's also probably why I bought the DVD set of the first season of Joey, the Friends spin-off starring Matt LeBlanc in the continuing adventures of actor Joey Tribbiani, moved to Los Angeles.

Of course, I also got it because of my interest in filming locations. The apartment house shown as Joey's on the show was less than a block from the apartment I lived in up until a year ago. There's a kind of a kick in seeing a real life location you know on TV in fictionalized form. (Notice how much bluer the sky is on tv....hmmmm) 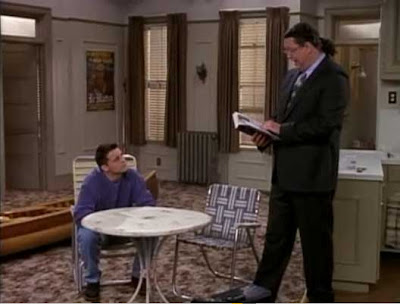 As an aside, I want to relay a story Penn Jillette told on his radio about the time he guest starred on a fourth or fifth season episode of Friends. He said it was really interesting to observe the cast. They were all running around stressing about holding onto the level of fame they had obtained on the show. Only one of them was just enjoying every minute of it: Matt LeBlanc. So, in a way, it's kind of nice that he was the one that ended up with his own program for two more years than the rest of them.
Just recently I revisited Joey through the DVD set for the first time since they aired. I was kind of surprised to find that Joey's nephew Michael, played by Paulo Costanzo, really reminded me of the guys on The Big Bang Theory. Michael is a grad student at Cal Tech, and the humor comes out of his contrast with the less bright Joey:
Michael: Actually, right now we're designing a mock up for an escape module from the International Space Station.
Joey: (laughing) What are you, a rocket scientist?
Michael: (deadpan) Yes.

Sound familiar? But the similarity doesn't end there: 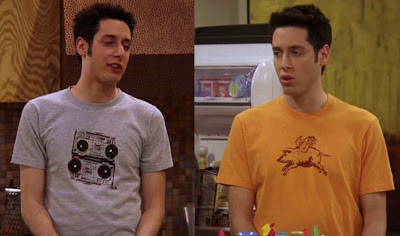 Notice that Michael tends to dress in a wide range of cool but nerdy t-shirts. Look familiar?
Well, I figured this unexpected little similarity between a fairly forgotten show and TV's new number one comedy might be fun about. I was more surprised, though, when I got to the third episode: Joey and the Party. In it, Joey and Michael throw a party to get to know their neighbors, and Michael's longtime rival Seth Tobin shows up with a girlfriend - meaning Michael is the last guy from his school to have a serious relationship. (Plot). So check out Seth when he shows up at the party: 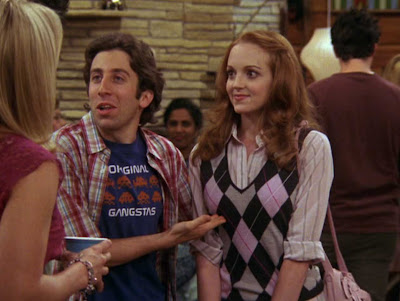 That's right - Simon Helberg, better known as Howard Wolowitz on Big Bang. He's dressed more like Leonard, but his character is very similar to the Howard we all know.
Seth: I'm bench pressing 90 pounds. Can you bench press your body weight?
Even more like Howard, from the end, when he and Michael reveal that they've been jealous of each other for years, and his girlfriend is a fake:
Michael: Seth, why did you lie?
Seth: So I could beat you for once, ok? You got into CalTech's doctoral department, I got rejected. You've got this killer apartment, I live at home and share a bathroom with my grandmother!
I'm not, by any means, suggesting that anything on The Big Bang Theory was taken from, or even inspired by Joey... but it's likely that Simon had some great scenes on his reel when he was being considered for the part of Howard Wolowitz. 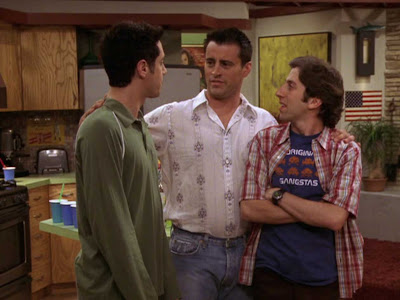 ...I wonder of Matt LeBlanc gave him any acting tips?
Posted by FCG at 8:53 PM 4 comments: