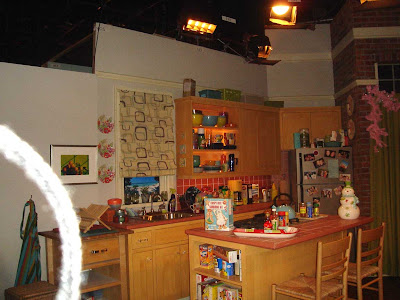 As always, life disrupts intentions to post more regularly, so I'm finally just going to post more of the best views from the Christmas party shared last time. Above, just a little bit more of a view of Penny's kitchen than we usually get. 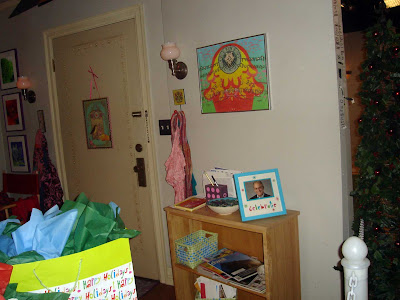 I'm not sure how many of these holiday decorations were there for the holiday episode this year, "The Maternal Congruence," and how many were placed by the set decorators (at least one of whom was in attendance) for the party. (Does Penny know the bald guy in the frame?) 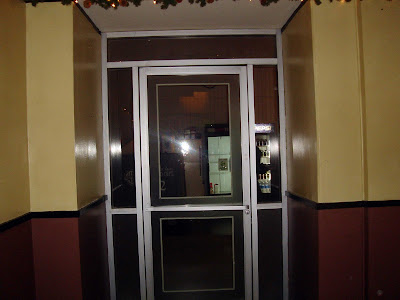 I threw this photo in to show you (well, just barely) one of the rarest Big Bang Theory 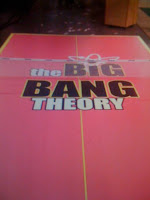 items out there: a clear-front refrigerator that sits in the back of the stage, with a "Big Bang Theory"panel on top where the brand name usually goes. Sorry it's so dark, but I really like this sort of thing. There's one (well, probably only one) in the entire world. It would go great in a fan's rec room, right by this custom ping pong table Kuyal Nayyar tweeted this picture of awhile ago. Aside from a prop, where are you going to find anything rarer than these? 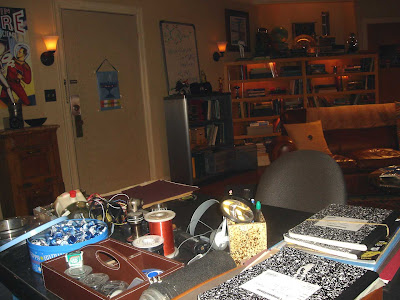 Sort of a more normal angle from Leonard's desk towards the door - looks like the desk has some extra party related ribbons and candy on it. 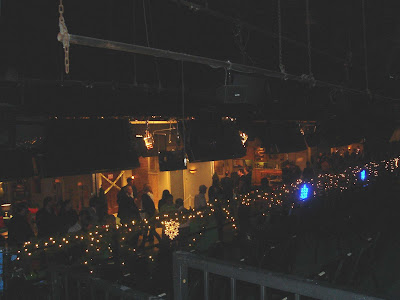 Finally I lightened up a bit this view from high in the audience area, showing the sets laid out exactly as you see them on TV - Penny's apartment to the left, the hall, then the living room and kitchen. Looks like Sheldon's bedroom is off to the right of that, in the same location where I've seen the college cafeteria, and the lecture room Sheldon and Leonard came to blows in. To the left of Penny's apartment I've seen Leonard's room ("It's cooler when girls aren't looking at it.), the Physics Bowl, and Wolowitz's bedroom. Oh yeah, and once, the lobby of the building where Penny and Sheldon got their mail was being filmed way off to the left, out of sight of the audience.
That's all for now - just been wanting to get back to posting more regularly, of course. I hope you enjoy these views.
Posted by FCG at 10:23 PM 3 comments: