We interrupt these messages... 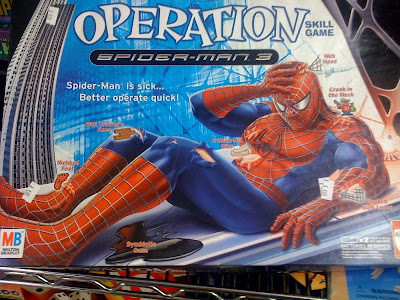 Sorry folks, I was really on a roll to start posting every three days, but my plans have been put on hold while I return to Syracuse for my Dad, who's in the hospital. He's doing better.
I should be back in Los Angeles pretty soon, and I intend to continue posting twice a week - every Monday and Thursday, I think. Until then, here's this completely non-ironic look at the Spider-man 3 version of Operation. (Spotted in a thrift store in Syracuse).
Posted by FCG at 7:36 PM No comments:

Email ThisBlogThis!Share to TwitterShare to FacebookShare to Pinterest
Labels: Spider-man

From Springfield, WIth Love 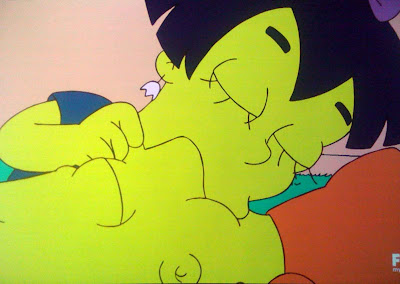 A recent episode of The Simpsons, "Stealing First Base," Bart experienced his first kiss, or something like that, while receiving mouth to mouth resuscitation. I thought he had his first kiss about fourteen years ago, but since he's only ten years old, maybe that episode doesn't count anymore...
Anyways, the kiss set off a great little montage of iconic cinema and TV kisses. It's interesting how easy they all are to recognize, even with the characters Simpsons-ized and no other context or sound included. I'm sure of all of them except the third - it looks like John Wayne and Maureen O'Hara in The Quiet Man - but I don't recognize the setting. Did they kiss in some church ruins at one point? I only saw the film once.
Enjoy. 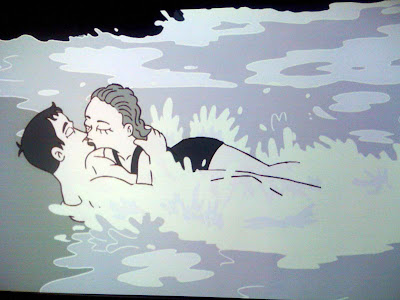 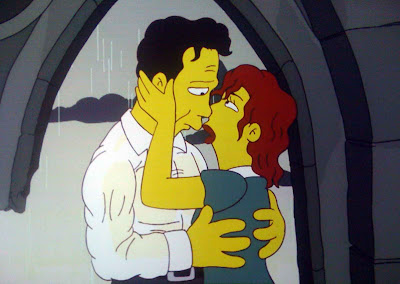 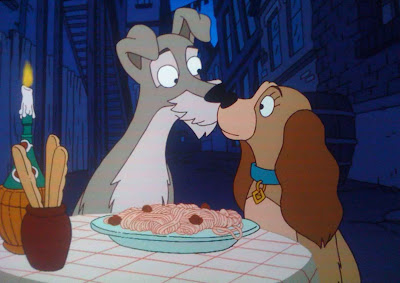 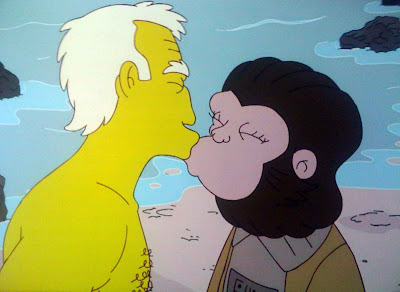 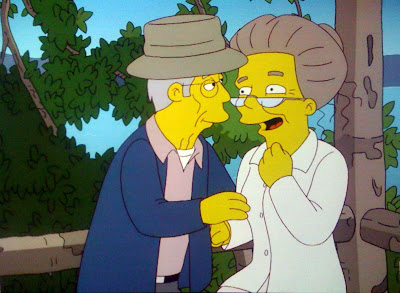 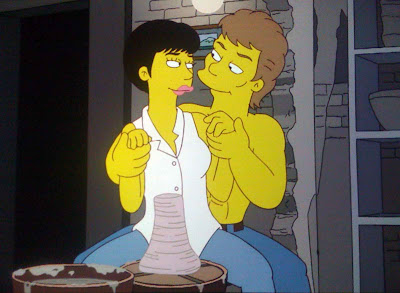 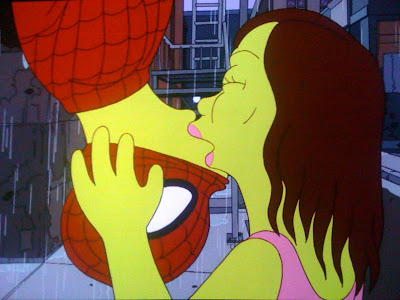 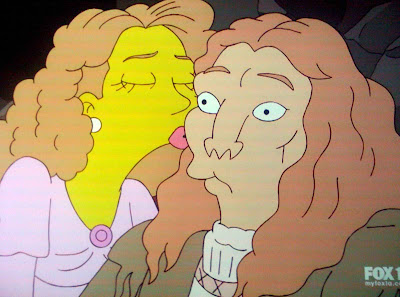 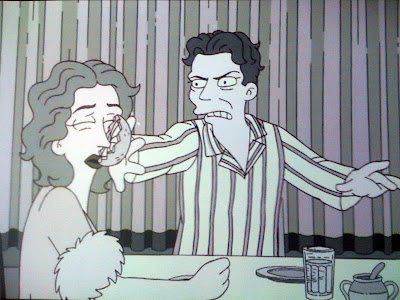 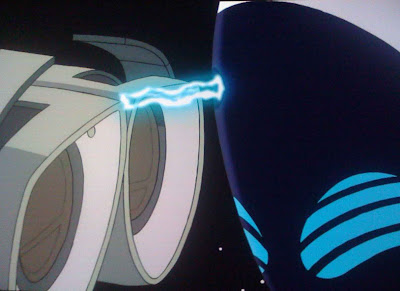 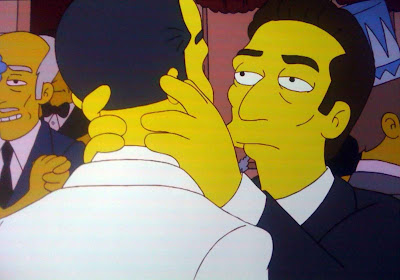 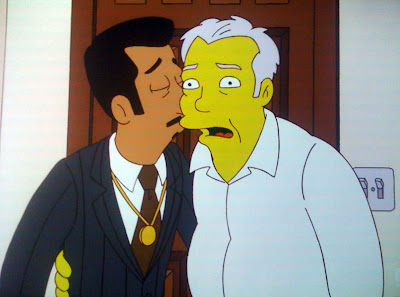 This last one is my favorite. If you're old enough to remember this, it was probably one of the biggest laughs ever on television.
Posted by FCG at 10:31 PM 3 comments:

Email ThisBlogThis!Share to TwitterShare to FacebookShare to Pinterest
Labels: Simpsons 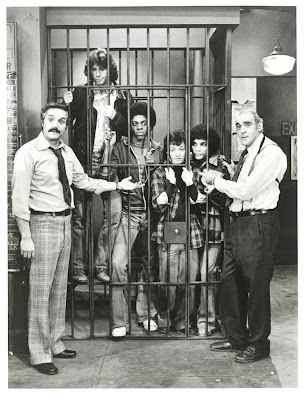 Couldn't resist this on Ebay recently. This scene never took place on either Barney Miller or Welcome Back Kotter, but it sure could have. Kotter was set in Brooklyn, and Barney Miller's 12th precinct was somewhere in New York, so it's entirely possible they could've busted the Sweathogs at one time or another. 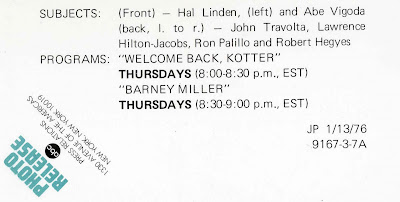 The truth is, they just ran back to back on the same night, but I loved it when shows crossed over like this. Remember when there was a blackout on every NBC Thursday night show set in New York? I believe it was Friends, The Single Guy, Seinfeld, and Carolyn in the City. Or even further back, when Loni Anderson took the Love Boat to Fantasy Island? (Well, not exactly, but almost). It can get a little complicated: Kramer on Seinfeld sublet his apartment from Paul Reiser on Mad About you. Ursula, the waitress on Mad About You, was twin sisters with Phoebe on Friends. (I recently heard the part of Phoebe was adapted to make her the twin of Kudrow's part on the other show). Paul Reiser's character on Mad About you did a documentary on Alan Brady, the star of the show Rob Petrie wrote for back on The Dick Van Dyke. Morey Amsterdam's character from Dick Van Dyke, Buddy, once appeared on the Danny Thomas Show. Now, the Williams family on The Danny Thomas show once shared a home with the Ricardo family on the Lucy-Desi Comedy hour, which featured the same characters as I Love Lucy, on which little Ricky was once visited by Superman - the real, super-powered Superman from The Adventures of Superman, played by George Reeves. So....Seinfeld lives in the same world as Superman, and every character in between. (Which would've made Jerry's day, he was a big fan of Superman on the show...) 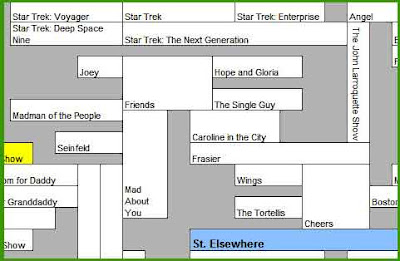 Don't think I'm such a big TV fan I know all this off the top of my head. Out there in the interweb, there's a site where they kept track of all the crossovers ever done on TV here. Between the grid here, mapping how the shows connect, and the key here, it's easy to spend hours seeing how almost every show you watched growing up is connected. And, if you believe the last episode of St. Elsewhere, they're all an autistic boy's imaginings within a snowglobe.
Sadly, neither Welcome Back, Kotter or Barney Miller appear anywhere on this grid - but at least this photo proves their worlds did intersect, somewhere out there in the multiverse, briefly.
Posted by FCG at 8:17 PM 1 comment: 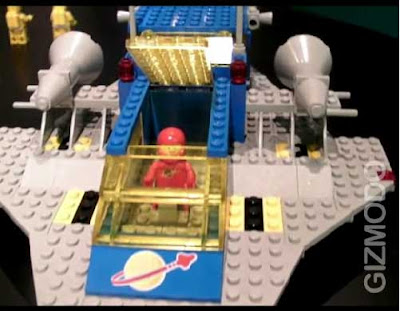 I don't often just throw up a link to someone else's site here, but this one is a little different: a friend sent me this link to a visit inside the Lego Archives. Aside from just being an amazing look at 1) corporate organization in a toy company and 2) a neat look at real old stuff in mint condition, I have much the same reaction when I come across the old space Lego sets as the author does. I Spent many a summer afternoon with my friend down the street (who's now a congressman) making up our own games of space battles between red and white space men (I think the blue and yellow were too scarce to be a whole side unto themselves). The best thing about playing space battles with Lego ships? Any time your ship takes damage, you just break off bricks from the appropriate spot.
Anyways, hope you enjoy.
Posted by FCG at 11:49 AM No comments: