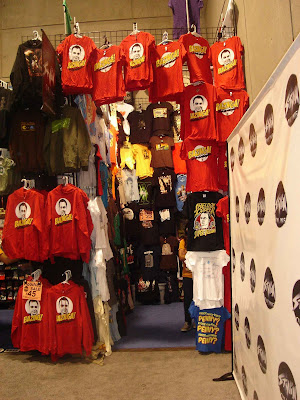 San Diego Comic Con 2010 is officially here, with preview night done and gone. Regular readers know I always enjoy the con, and right now I'm glad to be able to update you on The Big Bang Theory's presence at the show. Judging by the t-shirt vendors, licensees are putting a lot of stock in the show, expecting Sheldon's face to move much merchandise. This is amazing - these t-shirt dealers are a regular feature of the SDCC, and I don't ever remember a single theme dominating so much of their stock all at once - not Star Wars (well, to be fair I wasn't going back in the late 70's), not Harry Potter, nothing. While "Bazinga" far outnumbers the rest, "Sheldon Cooper Supervillain," "Knock Knock Knock Penny," and the friendship algorithm are well represented too. (I have to confess to being a t-shirt snob. I prefer, if I can, to wear a shirt almost nobody else is likely to be wearing. I was given an "Oh My God, they Killed Kenny!" South Park shirt ten years ago, and I'm saving it to wear at least eleven years after the show is off the air. 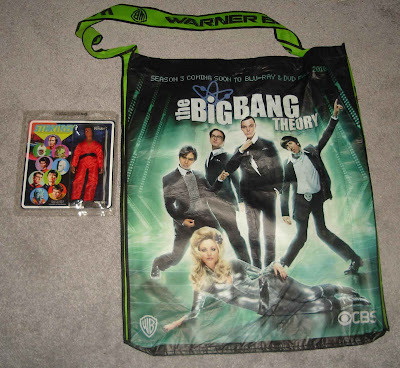 I wasn't sure if I'd get the new BBT bag at the con, and was prepared to go to Ebay for it, when good friend (and regular reader of fancollectorgeek) Jason Ryan showed up - he had traded his Batman bag for the BBT one just as a favor for me. (Note: good advice to collectors is to know good people. It makes it much easier). The bag is shown here next to the Khan Mego-sized doll I picked up today for size reference. (It's well known that Mego-sized dolls are the standard unit of measurement for oversized bags). If it goes like the past two years, this will be the artwork on the season 3 DVD set (first season to also be available in blue ray!). Does anyone out there know if they're parodying a specific film poster or album cover or something here? Penny vaguely re minds me of Barbarella, but I can't place it... 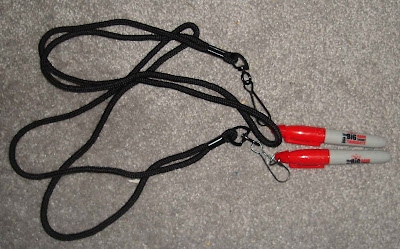 Jason also nabbed for me these sharpies on lanyards that were given out at the CBS booth to promote the show's move to Thursday night. They made sharpies because, um...I guess smart people like to write with things tied around their neck? 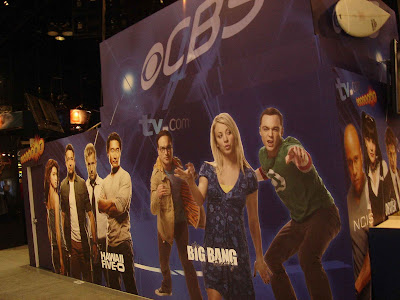 Just the back of the CBS booth. Odd expressions on all the actors. There's supposed to be a signing here tomorrow - we'll see if I get in, or if it turns into another huge siege like last year. Yikes. I'll keep you posted, probably after the show.
Take care!
Posted by FCG at 2:02 AM 1 comment: 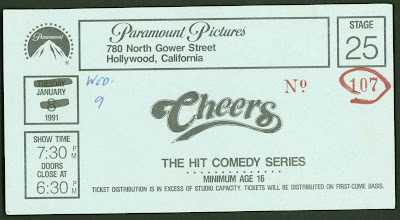 I have been a huge fan of the show Cheers since I first found my parents watching it late one night during its first season - we're talking late 1982 here. (Dates me a bit, huh?) To be honest, I don't really remember if I liked it right away, but I did get into it pretty quick. Back in those days, if you missed an episode, you just might never see it again, and I soon began taping it on Beta tapes, and trading with others who had taped episodes I missed. (It's funny: tapes were expensive then - as much as 10 dollars apiece - so pretty much everybody paused during the commercial breaks to save tape. It was a valued skill to be able to anticipate when the show was coming back on and start up without missing the first seconds of act 2 and so on. Now, in the days of DVD series releases, it's the commercials that everyone wishes they had recorded).
Generally for a sitcom, it's rare for there to be much to collect. The shorter the show runs the rarer (explaining why I treasure everything I've ever found for the 7 episode show Quark. Cheers lasted 11 seasons, so eventually it was not hard to find games, t-shirts, and of course beer glasses emblazoned with the series logo. Of more interest to me is ephemera (which I define as "stuff nobody meant to be saved for long) like the unused show ticket, above. When I first moved to Los Angeles I lived one block from Paramount Studios, and before I had a job I'd wake up early to stand online trying to get into that night's show. I went three or four times before I made it in (Cheers Has Chill, aired March 14 1991 - Rebecca wants to turn the pool room into a tea room). I saved the tickets from the times I didn't get in, I also got to see the Arsenio Hall show once when I was too late for Cheers tickets, with musical guest Iggy Pop.

Back to collecting: also collectible are items from the Bull and Finch pub in Boston, which served as Cheers in the exterior shots of the bar during the credits. I got to visit during my tour of duty as a knee brace salesman soon after I came to LA, a job that let me travel most of the country. This button was a little freebie giveaway, and I know I have a matchbook or two from the pub somewhere. (Sadly, I didn't have a beer when I was there - I had a hamburger. ) 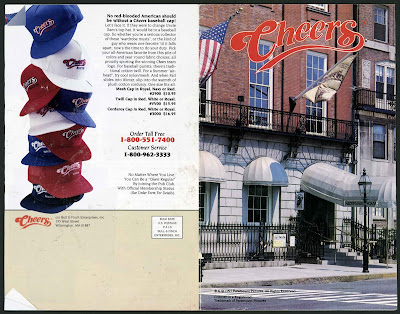 This catalog that I picked up there is full of merchandise, and could be considered a collectible now itself. I have always naturally saved stuff like this, and you have to wonder, almost 20 years later, how many of these exist. Either a handful of them or spread out with tourists around the globe like myself, or someone in Boston has hundreds of them in mint condition in boxes in their basement or store room. Either way, they're only a thing of the past, as merchandise is now available online from the pub's website. 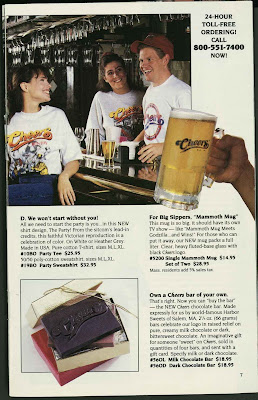 Of special interest to anyone who liked my now-classic post on the dilemma of saving and collecting food is this page offering Cheers logo chocolate bars. I wonder if any of these still exist? (And does hanging out in Cheers t-shirts really make you that happy?)
Up next: Penny's last names (Big Bang Theory) and just around the corner, San Diego Comic Con 2010!
Posted by FCG at 6:22 AM 1 comment: 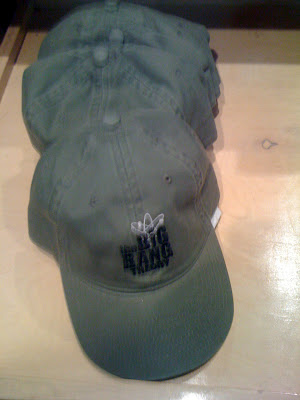 I'm running exactly a week late with my promised "every Monday a Big Bang Theory" entry. Those close to me know why and I thank you for the support - the rest of you, I apologize if you've been waiting. I'm afraid this first one isn't much, but I just wanted to finally note that just as the show was wrapping their third season on the Warner Brothers lot last May, they finally had Big Bang Theory merchandise for sale in the Studio store. I was lucky enough to receive one of these caps for my birthday. I haven't seen them anywhere else - is it possible they're studio exclusive? Please let me know if you've seen them out in the world. 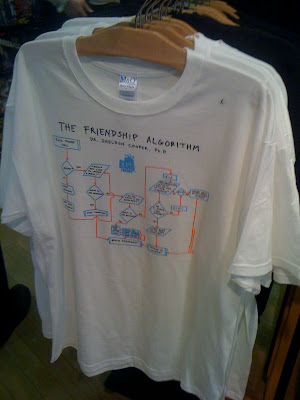 Otherwise, all they had was a wrack of t-shirts that seem to be everywhere - several odd images of Sheldon with Klingon or Bazinga! references, and the one I like best, reproducing Sheldon's Friendship algorithm, above. 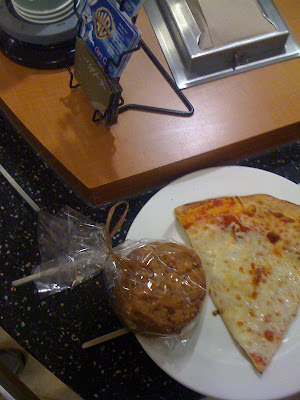 I also had the opportunity to try the peanut butter cookies from the Warner Studio commissary that Jim Parsons said he loved back in the 5 questions interview I reproduced previously (click Big Bang Theory over on the right to see it and earlier entries). While the first one in the pack of three was unimpressive, the other two were delicious - a slight taste of toffee in them, adding a little extra chewiness. Oh, and the pizza was quite good too.
In the next Big Bang Theory entry in a week, I'l recount the Museum of Television & Radio's first BBT event from a year ago January. (Do you see why I'm forcing myself to do a weekly BBT entry? I have many backed up!) I haven't seen the info presented anywhere else, so it may be of interest to fans. For example - do you know any of the potential last names for Penny? They named three of them that night!
Be well.
Posted by FCG at 10:43 PM 1 comment: