Scott Pilgrim vs. The World: No Spoilers, and a lesson in swag 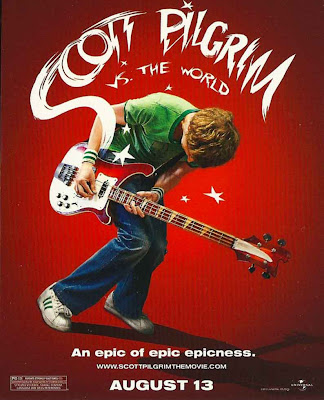 About a week ago, I had the opportunity to see the new movie Scott Pilgrim vs. The World. This is a good time to state my Rule #1 for this blog: no spoilers, ever. I have no interest in seeing something early to run home and write out my synopsis of the movie or show. If I like it, I like the way they told the story, and I don't think you're going to appreciate it better by reading my truncated summary. The most you'll get from me is "it's good. I think you'd like it if..." In this case, gamers, comic book fans, and music fans are all likely to enjoy this film. From the director of Shaun of the Dead and Hot Fuzz. 'Nuff said.
The funny thing is, only after leaving the theater and seeing the poster in the lobby did I realize I had picked up a ton of swag for the film at Comic Con. in fact, my fiancee and I stood in a line across from the convention center to each get a bag of stuff: 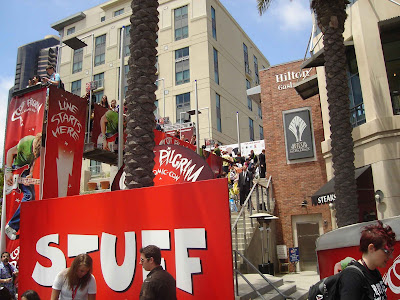 See? Stuff. They were giving it away right at the "stuff" sign. I didn't make it upstairs, so I don't know what kind of party / immersive environment they had going on up there, but it looks like more t-shirts were involved. Here's the free stuff they gave us: 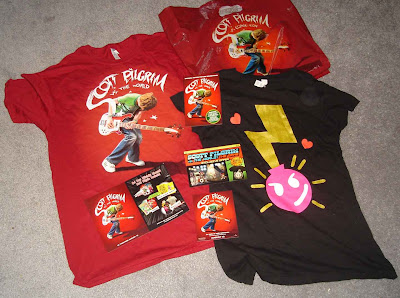 T-shirts, a bag, post cards, free online stuff - all sorts of things. notice the bag says "Scott Pilgrim vs. Comic Con." These are the kinds of things a completist collector of Scott Pilgrim will be wanting to track down. 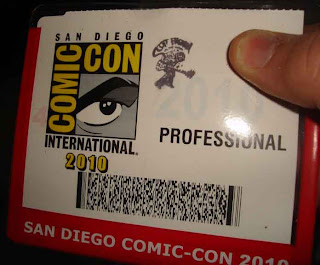 In fact, if you were really serious about wanting to collect all Scott Pilgrim stuff, you'd have to track down the Comic Con badge from somebody who stood on that line, because they stamped your ID with an oh-so-neat Scott Pilgrim rubber stamp to make sure you didn't come back in line the next day and get another bag of stuff.
If it sounds ungrateful of me to not know I already had all this stuff from Scott Pilgrim (or at least, maybe, that their promotion was unsuccessful in my case) it may help to consider all the free stuff that is given out at the San Diego Comic Con. To help, I laid it out on the living room floor and photographed it: 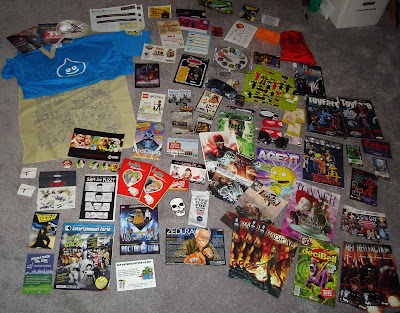 Free comic books, cards, magazines, buttons, t-shirts, patches, Dexter cheek-scar tattoos, trading cards, Mad Men paper dolls, Archie wedding invitations (both Betty and Veronica), etc. Somehow, I managed to be given four copies of a comic called "radical" over the week without realizing it. Granted, much of these are advertising flyers and catalogs, but it shows how the stuff adds up.
(Collectors note: even though I am not particularly interested in collecting the "Showtime" buttons for Dexter, Weeds, Nurse Jackie, and Californication, it does bug me that I got 3 Weeds buttons and no Nurse Jackie. Just a little bit of OCD manifesting itself...)
A lot of stuff, right? But that doesn't include all the bags I was given there, shown below (with a t-shirt from the "Green Hornet" car garage that I forgot to include above): 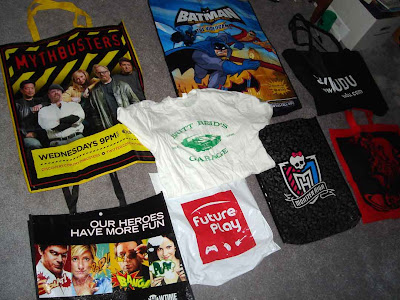 Some people list their Comic Con swag on Ebay and try to sell it all for 50, 100, even 200 dollars to recoup their expenses for attending - and I guess people do pay it. Let's face it, if you collect Mythbusters, there isn't all that much different stuff out there to collect, so you'll be wanting their oversized Comic Con bag.
Oh - and to be fair, the above didn't include the free stuff for The Big Bang Theory that I already pulled out into that collection: 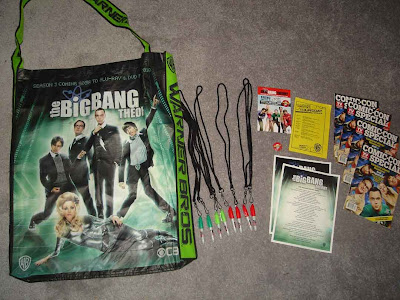 No, I don't need four copies of the TV Guide - I'll probably end up giving or trading some to other collectors. But looking at all of this stuff, it occurs to me someone could have a very interesting collection of stuff if all they ever did was go to Comic Con every year and save all the free stuff they got. That would be an interesting cross-section of pop culture.
Hmm. I wonder where those free pogs I got there back in '93 are now...
Posted by FCG at 8:45 PM 3 comments:

For our first 149 posts, fancollectorgeek has been curiously anonymous - "curiously" because the only people who likely noticed it was anonymous all knew who was writing it, and no one else likely cared. It has been easy enough to figure out who's writing, either from my Dad's obituary recently linked, or from the many links from the excellent (and personally inspirational) blog of Jim Fanning, Tulgey Wood that identify me by name.
The reason for this (however transparent) anonymity has currently been suspended, making this an excellent time to share the collectible, below, which bears my name: 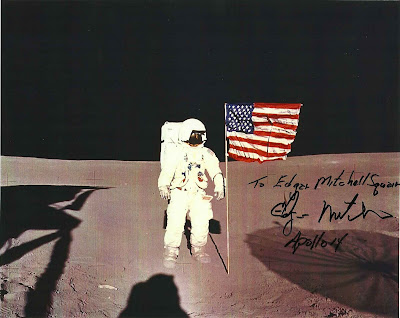 Astronaut Edgar Mitchell was the sixth person to walk on the moon, in 1971. It also happens that his first and last name are the same as my first and middle - a coincidence, I'm named after my father's uncle, Edgar Mitchell Davis. Still, that coincidence was enough to make me very interested in the space program when I was a kid. I was only four years old when Mitchell walked on the moon during the Apollo 14 mission, but I vividly remember watching it on TV while visiting my grandmother's house in Akron, NY that summer. I had never heard of anyone that had any name in common with myself (well, unless I had heard of Edgar Allen Poe by that age), so I was very interested in his exploits.
When I heard that you could order an autographed photo from Mitchell's website, I decided I wanted to own one myself. Like actors like William Shatner and June Lockhart, many astronauts charge a premium for signed items. The high demand from fans who want to be sure they're getting the real thing makes it a very lucrative sideline for them. It's my understanding that for years Lockhart didn't do autographs at all until finally, in the early 90's, she acquiesced to sign at a Lost In Space convention in Los Angeles for the then unheard of price of fifty dollars a pop. Fans lined up by the hundreds keeping her busy the whole time she was there. 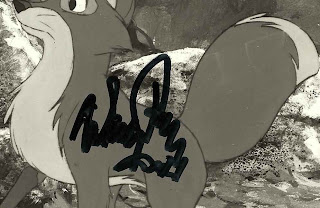 Now, if she was signing at the same rate that Mickey Rooney was (every 12 seconds, five signatures a minute) when he put his scribble on a Fox and the Hound photo for me, she cleared about fifteen thousand dollars an hour that day - slightly less if she took a break to stretch her wrist or get a drink of water.
Nice work if you can get it!
(Just for the record, Mickey Rooney charged 20 dollars a signature, and for charity. not bad).
Posted by FCG at 12:20 AM 1 comment: