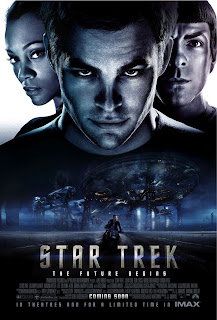 I recently viewed the latest Star Trek film for the second time. First was in the theaters, second at home on Blu-Ray, much later, much removed from all the hype about whether or not J.J. Abrams was destroying the franchise, or broke the Prime Directive, or any of that. I was watching it as pure entertainment, as a science fiction fan but also a lifelong Star Trek fan.* ("Spoilers" follow if you're actually reading this before you've seen the film).
I thoroughly enjoyed the film. Abrams played it safe - or smart - by setting his Trek in an alternate universe created when the uber-Romulan villain bounced back in time and attacked the USS Kelvin, just as one James Tiberius Kirk happens to be born. So, everything we see in this timeline is completely new and therefore free from any continuity scrutiny you can apply.
Ordinarily, a film set in the formative Star Fleet Academy years of our heroes would require - at least to the hardcore continuity buffs - a look somewhere between Captain Archer's Enterprise and Captain Pike's Enterprise as seen in the original pilot "The Cage" or the two-part episode "The Menagerie." But since the film starts with a disruption to the time stream - a huge, deadly attack by an unknown enemy that never happened in "our" Trek history - all bets are off. Assuming a greater focus on offensive and defensive power for starships after that, there's no reason to insist anything in this film has to match anything we've seen before. Only that brief scene on the Kelvin needs to fit into the original timeline,** and I'm surprised on close inspection to believe that it does:

On Captain Archer's Enterprise (left), the controls are large manual slides and hard buttons, like on a 1980's stereo console. By the time of Kirk's Enterprise (right), controls are very simple and very solid, like a 1960's cassette player. The detail of the Kelvin shuttle from the film (middle) shows nice, hard-wired type toggle switches, like a 1970's mixing board (Ok, I'm guessing on that one). To me, a believable intermediary step. (It was already interesting to note, once the original series was placed in a timeline between the movies produced in the 80s+, and "Enterprise" produced in 2001-2005, both with greater detailing to the sets, it implied there was an intentional decision around the time Captain Pike came along, to make the starship corridors very plain and straight, and consoles made up of simple hard buttons. Maybe one too many "Fire torpedoes" apps froze up when they pressed their touch screens...)

That's the really picky, tech analysis of the film. In any case, I found it very entertaining, and most of the performers captured just enough nuances of the original characters to feel true to them without just spewing bad imitations of the originals. 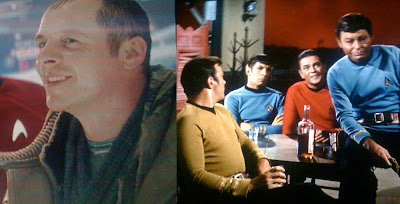 It's an interesting study of the nature of "suspension of disbelief" what is the only part of the whole movie that, as a Star Trek fan, gave me pause: the size of Engineering, when Kirk and Scotty beam into it. It's HUGE. 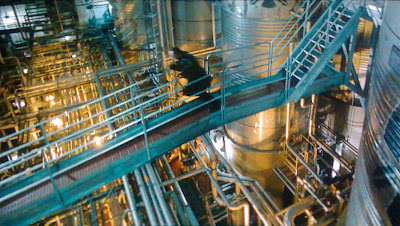 Huge, with lots of empty space, and apparently a lot of it constructed out of concrete, as well. I know the Enterprise is big, but this amount of space looks like it should literally take up the entire secondary hull and then some. (Some of this concrete construction is seen on the Kelvin, too). 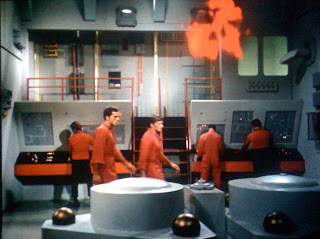 On the original series, Engineering looked big, but believable. You could at times see a couple levels, and maybe a ladder poking up higher, but it looked like it was built with an economy of space (no pun intended) in mind.
This kind of detail shouldn't pull you out of the narrative, but it often does. The truth is, they found some kind of real - world refinery or such to film in, and decided it looked futurey enough to be the Enterprise. Money saved on building a set or even rendering one.

It's not as if the Enterprise is the size of the Red Dwarf, which is established as having thousands of levels, a Huge prison system entirely hidden from the normal crew, and cargo bays big enough to dwarf T-Rexes. Anything goes there, and they often shot in real world industrial plants that looked perfectly like part of the ship.
Not that this is a review, but I enjoyed the film even more the second time than the first, and watchign it at home gave the chance to look closely for all those details of design and performance that you miss on first viewing. 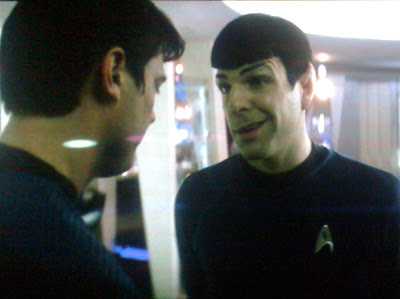 Plus, you gotta love outtakes where you get to see the Vulcans crack up...
*That's, right, Star Trek fan. Not a Trekker, or a Trekkie, just a fan of the whole franchise.
**Okay, bonus points if you wanted to point out that Ambassador Spock's ship is from our timeline too, but since it's from the farthest future point we've ever seen in that Universe (and perhaps ever will?) it's safe from scrutiny too.
Posted by FCG at 1:06 AM 2 comments: