Why am I here?

And I don't mean that in any sort of a philosophical way. Why am I here on blogger? 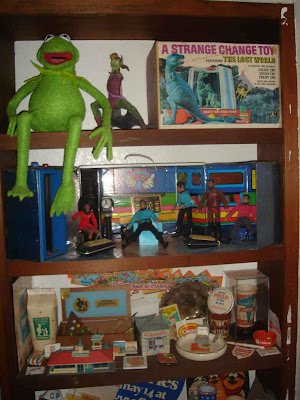 I started this blog over a year ago, in part to understand and examine my own urge to collect things. As you can see by the list of labels over on the right side, I have many, many interests. That's not necessarily a bad thing, but it can become very frustrating when you're compelled to collect items from all those interests. And - you don't even know the half of it. I've barely mentioned comic books, and I considered myself a comic book collector ever since I was a little kid. I have a huge interest in original comic art, and zombie comics and movies right now, and they haven't even made it on here much. I feel like I have far too many interests, and I was tired of feeling compelled to buy something because it was cool, only to have it end up in storage - or, now, in a box in the garage. So writing here has helped me to deal with stuff I've collected, share and celebrate it, and feel like there's a use for it.
It has not helped me to stop collecting, however. I have developed a sense that just because something is cool, that doesn't mean I have to buy it, independent of writing here. I have actually bought a few things just because I wanted to talk about them on the blog, if you can believe it. Way back here I rediscovered my old collection of James Bond paperbacks, and I ended up buying a sort of rare copy of Live and Let Die to talk about there. And that's not the only time I've done that, either. I bought a stack of comic books I wanted to write about over a year ago. Now, with the move, it's going to take me awhile to find them, let alone write about them here!

Part of the problem with being a collector, for me, is I have a very hard time getting rid of things, too. This button above was something I wore at a trade show 18 years ago when I travelled around the country selling knee braces. It doesn't hold a lot of meaning for me, and has little or no value, but it's hard for me to get rid of. Good, bad, or indifferent, it represents a period of my life.
Something like this, though, is good for me to take a digital picture of, talk about briefly here, and actually throw away. This may not sound like much, but it's a step for me. 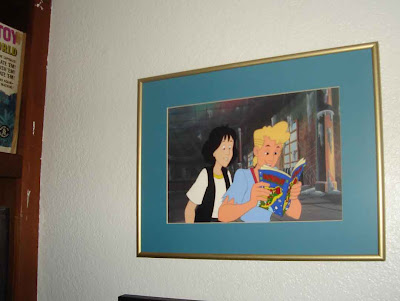 I have taught myself to have more focus in what I collect. Just because something is cool, doesn't mean I have to buy it. However, if it falls specifically in an area I collect on, it's fair game. I still collect animation cels - specifically, obscure or odd animation cels. One advantage in this is they rarely cost very much - most of my purchases were under 20 dollars apiece, like this original cel and original background from a Bill and Ted cartoon series. ( I say "a" series because there were two of them, believe it or not. One was better than the other, but now, I can't even tell them apart by just a cel). I really enjoy this piece, and the fact that they're reading a comic book in the image only makes it better for me. 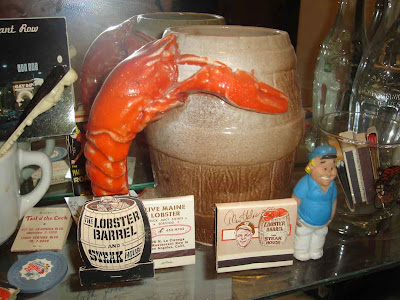 I also am still really looking around for anything on or from Alan Hale's Lobster Barrel, the restaurant he owned at 826 N. La Cienega Blvd., "The celebrity end of restaurant row." My interest spilled out to the rest of the boulevard, too, largely because it was once such a big deal and now there's scarcely a whisper of "restaurant row" anywhere - even on Restaurant Row. I have a lot more to share both on the Lobster Barrel, the other restaurants that have occupied 826 La Cienega, and the rest of the boulevard. Why? Because I enjoy researching, that's why. (By the way, the mug here really has nothing to do with Alan Hale's restaurant, but come on - a lobster and a barrel - how could I resist?) 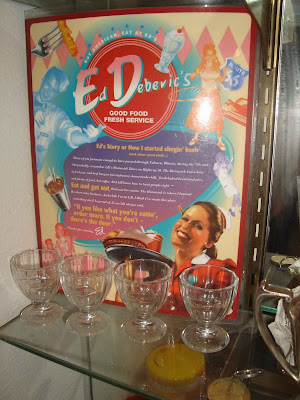 I've semi-seriously set out to get two items from every restaurant that I can on the Row, and I've had pretty good luck again without it costing much. Like from Ed Debevic's: Debevic's was a late entry on the boulevard, open when I came out here in 1990, and I dined there several times myself. It was famous for rude wait staff who dressed like 50's and 60's icons (my last waiter was Howdy Doody. Seriously) and danced on the tables and bars. they also had tiny, tiny sundaes which they gave you free for your birthday. I collected a menu and four of the tiny sundae glasses you see here, so that counts as two (different items to represent the restaurant for my collection).
So, I'm just taking a moment to reassess what I'm doing here: you'll see more of what I actively collect, what I used to collect, and what I can't believe I (or anyone) collected. More, of course, Big Bang Theory, and everything associated with being a fan of the show. And more of everything a fan, collector, or geek could want.
Your comments and questions are always welcome here; I appreciate nothing more than a good question I can do some research on. You can comment on the blog or write me at fancollectorgeek@earthlink.net - sorry, I don't know how to make that the kind you click on that conveniently pops open your email.
Also, follow me on twitter at fancollectrgeek (notice the second o is missing)! There, I post anything I'm watching that I recommend, and anything I come across that fits in the Fan/collector/geek categories. If you follow me, please just send a Horton hears a who type "We are here!" message so I know you're a real person.
Oh, and of course: we've got at least one more visit to the Michael Jackson auction to write up. It's a good one.
Thanks for listening - I'll see you in the funny papers.
Posted by FCG at 9:22 PM 4 comments: 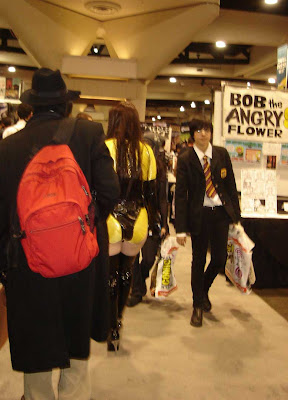 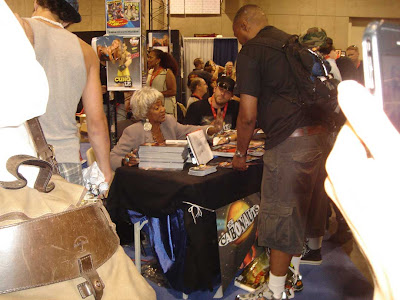 It's truly one of the odd things about Comic Con: you can practically trip over a science fiction legend like Nichelle Nichols without even realizing she was there.
Posted by FCG at 7:39 PM No comments: 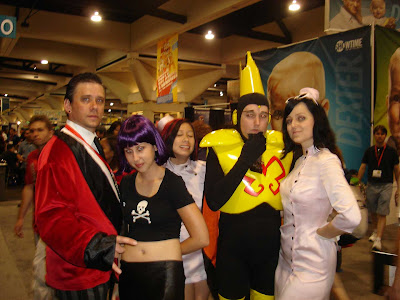 Okay, I don't have anything funny to say about this one - I just thought it was great to see these folks dressed up as Venture Brothers characters. Orpheus, Triana, Dr. Girlfriend, the Monarch and another Dr. Girlfriend. Fantastic.
This was just about my biggest geek moment at the con - the crowd sort of parted and they were right in front of me and I just said "Oh, wow!" They immediately moved into "take a picture" pose; I just snapped this one.
Just an aside - I was starting to fix the redeye, but I stopped. I enjoy posting photos here in a fairly raw form, so here you go.
Posted by FCG at 11:49 PM No comments: 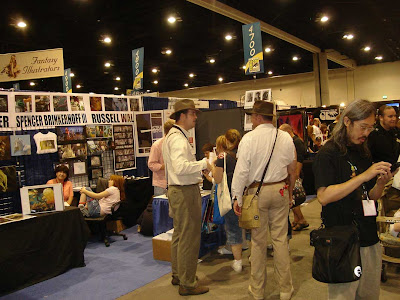